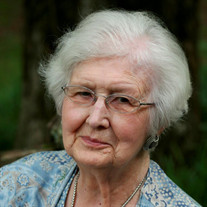 Gladys Machen Mitchell was the middle of three children born to Francis Marion “Frank” Machen and Rosalie Black Machen of Crossville. Her older brother was the late Kermit Machen of Geraldine and the late Juanita Machen Guice of Jacksonville, Alabama. Mrs Mitchell was a member of the Geraldine High School class of 1936. In the depths of the Depression, money to pay teacher salaries ran out before the end of spring term, so her class was declared “graduated” a month ahead of time that year. She was a top student, and finished as salutatorian of her class. She met her future husband, Hugh Foyd Mitchell of Tenbroeck during their school years. Foyd served in the U.S. Army Infantry at Fort Benning, Georgia. Toward the end of his first enlistment, they married in 1939. With the start of World War II, Foyd's previous military experience qualified him to serve as “cadre” (training staff) for new recruits at Camp Sibert near Gadsden. Gladys served diligently on the home front, raising their son and working, while Foyd served in the Korean War and also the Army of Occupation in Japan after WWII. Gladys took an ocean voyage with their son, Kenny, from Seattle, Washington across the Pacific to Japan (which included several days stalled at sea during a typhoon) to join Foyd there in 1953. She was a nervous but diligent traveler wherever duty called. This is notable because “duty” included a Japanese bus driver forcing her to enduring numerous hairpin turn negotiations while climbing a mountain road, including backing up –- without guardrails! Gladys enjoyed solving New York Times crossword puzzles and was a formidable Scrabble player. She was a voracious reader of both romance and detective novels, as well as books about U.S. history and Southern culture. She enjoyed crochet and knitting, as well as country, bluegrass, and gospel music, particularly Hee Haw, the Glen Campbell Show, and later, live performances by the Gary Waldrep Band in Marshall County. She was legendary for her high energy level, her brisk walking speed, and her frequent (and single-handed!) rearrangement of her living room furniture to spice up “slow” days at the farm. Gladys stoically cooked up the fish her men caught . She also worked very hard for many years to ensure she kept everyone well-fed while Foyd farmed and enlisted his son and grandsons in various projects on their property. Gladys and Foyd also enjoyed their grandchildren, and later their great-grandchildren throughout the remainder of their lives. She was dedicated in her care of her husband, Foyd, after his 1986 stroke until his death in 1995. She also diligently cared for both her parents in their later years. She is survived by her son, Kenny (Emma) Mitchell, her grandsons, Samuel Mitchell and Douglas (Shawn) Mitchell, great grandchildren, Emily Rose, Walker, Gus, John Ambros and Gabriel, 3 Nieces and 2 Nephews. The family has suggested in lieu of flowers for donations to be made to the Wounded Warrior Project.

Gladys Machen Mitchell was the middle of three children born to Francis Marion &#8220;Frank&#8221; Machen and Rosalie Black Machen of Crossville. Her older brother was the late Kermit Machen of Geraldine and the late Juanita Machen Guice of... View Obituary & Service Information

The family of Mrs. Gladys Mitchell created this Life Tributes page to make it easy to share your memories.

Gladys Machen Mitchell was the middle of three children born...

A comforting word from you means a lot.

Send flowers to the Mitchell family.